Kavanagh College, Dunedin: Erika Fairweather (Y10) competed at the National Age Group Swimming Championships and came first in four categories and second in two categories. Anita Samasoni and Annabelle Ring have been selected in the NZ U15 Girls Basketball squad.

Wellington, Porirua & Lower Hutt schools: were thanked by the Sisters of Compassion for their support collecting for the Soup Kitchen as part of their Annual Street Appeal.

Baradene College, Auckland: Bella Hosking gained 1st place in the National Council for Women Speech Competition. Lara Hopkinson and Grace Cummins have been selected for the NZ U17 Cycling team to race at the Goulburn Junior Tour in New South Wales. Amelia Smith (Y7) won Gold in Kumite and Bronze in Kata at the Karate New Zealand Open She has also been selected to compete at the Oceania Cup. Gabrielle Salmon (Year 11) has been selected to represent NZ at the World Down Syndrome Rhythmic Gymnastics Championship in Germany in July. Gabrielle is very committed to wearing the Silver Fern with pride. Danielle Watson has been selected to represent NZ at an International Weightlifting event – ‘Oceanias’. Petra Buyck has been selected in the NZSS U15 Football team. At the NZ National Age Group Championships, Summer Miln came 1st 100 Freestyle relay, 2nd 50 Freestyle, 3rd 100 Freestyle and Trelise Dance, 1st 50m & 100m breaststroke, 2nd 200m breaststroke & 100 Medley relay.

Carmel College, Auckland: 2017 School leaver Hayley Rutter attended the NZCRA Scholarship Top Scholars Award ceremony to be presented with NZ Top Scholar in Technology. Hayley worked with Whangaripo Buffalo Farm to develop a carob and vanilla flavoured buffalo milk which is lower in lactose and sugar than other flavoured milks currently on the market.Jurlina Carrol (Y13) gained 2nd place at the Oceania U21 Judo Championships. Sionann Murphy (Y9) won two Gold medals for 50 Breaststroke and 50m Freestyle and a silver medal in the Para relay at the Secondary School Swim Championships. Sionann was invited to Paralympics NZ Regional Development Camp for Swimming and she has qualified for the NZ Open Championship in July.

Francis Douglas Memorial College, New Plymouth: Tim Kowaleski (Y9 competed at the Robotics World Championships, in the US. The team he was in placed 9th out of 500 teams competing. Henri Lehrke won the NZ U17 Road Cycling Race. He has also been selected by Cycling New Zealand to race in the Goulburn Junior Tour in Australia. Jacob Butler (Y8) competed in the National Karate Championship, he came 1st in two events Kata and Kumite for 6-4th Kyu (Green Blue and Purple belts) for <150cm. Adam Loveridge won two NZ titles. He won his 125cc 12-16 years class and also too out the overall Junior which is 0-200cc 2 stroke and 0-250cc 4 stroke 12-16 years old He is now 1st in NZ.

Villa Maria College, Christchurch: Holly Rahurahu (Y10) has been selected to represent NZ in swimming at the 2018 Australian State Teams Championships. Melissa Dunn (Y10) competed with the NZ Karate Team at the World Karate Federation Oceania Championships. Seven countries were represented with over 500 athletes. Melissa won a Silver in the Kata and a Bronze in the Kumite and in the teams event. Melissa was one of ten NZ Team members who were recognized for bringing the team together with spirit and courage. They were presented with a Ceremonial Māori Trophy and a rousing Haka was performed in their honour.

St Mary’s College, Auckland: Sarah Poulter has been selected by the Royal Society Te Apārangi to attend the USA Space Camp in Alabama. She was selected to participate in an international gathering and experience at the Advanced Space School Programme. She will be immersed in a programme that is designed to space science and exploration. She will be involved in hands on astronaut training as well as learning about the emotional, mental and physical demands astronauts face. Asia Atatoa (Y11) competed at the NZ Hip Hop dance competition and her crew won their division and have qualified for the Hip Hop International finals in the US.

Our Ladies of Victories School, Sockburn: Savanna got 1st place for her National Dancing Solo at the JT Dancing Competition. She also got 3rd place for her other four dances and got awarded for Novice Jazz under 12.

Sacred Heart College Hamilton: Nikita Raman has been selected by the Royal Society Te Apārangi to attend the Asia Science Camp in Indonesia. Nikita is one of five NZ students selected to attend this annual event that aims to enlighten science talented youths through discussions and dialogues with top scholars and technologists from around the world.

Volunteers from Catholic schools in Wellington, Porirua and Lower Hutt collecting for the Soup Kitchen’s Annual Street Appeal on behalf of the Sisters of Compassion. 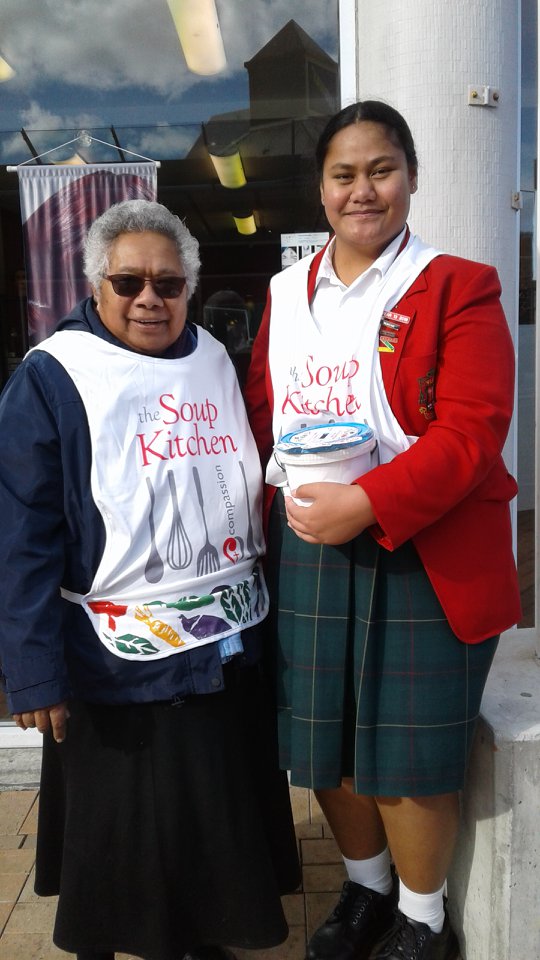 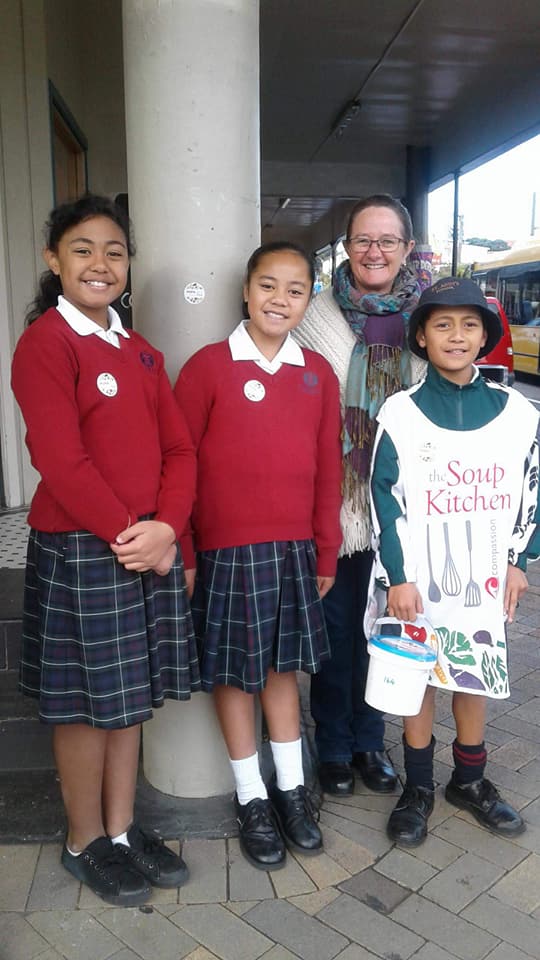 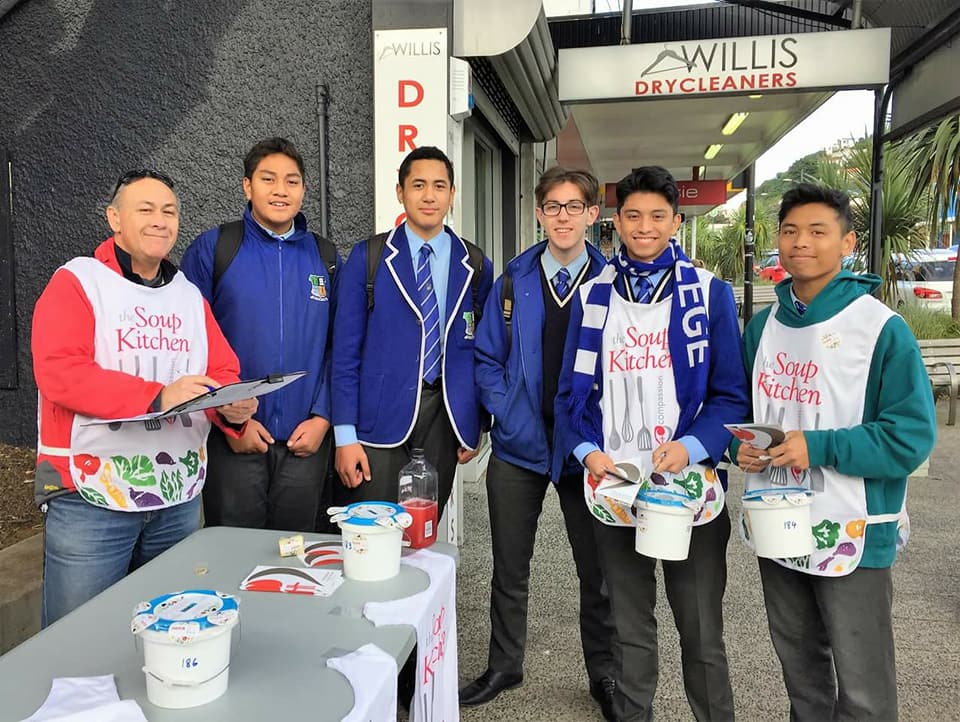 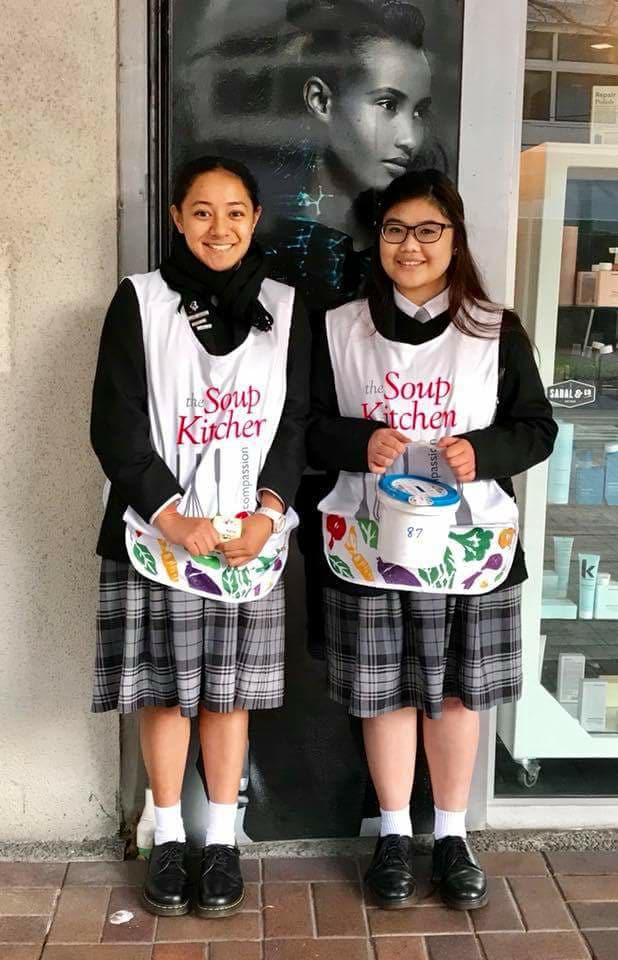